No Machines in the Garden

A decade ago, I mused about the implications and limits of what was then called “cyberlaw.” By that time, scholars had spent roughly 15 years experiencing the internet and speculating that a new jurisprudential era had dawned in its wake. The dialogue between the speculators and their critics was famously encapsulated in a pair of journal articles. Lawrence Lessig celebrated the transformative potential of what we used to call “cyberspace” for law. Judge Frank Easterbrook insisted on the continuing utility of existing law in solving cyber-problems. The latter’s pejorative characterization of cyberlaw as “law of the horse” has endured as a metonym for the idea that law ought not to be tailored too specifically to social problems prompted by some exotic new device.

It turns out, as I mused, that Lessig and Easterbrook and others in their respective camps were arguing on the wrong ground. Cyberspace and cyberlaw pointed the way to an integrative jurisprudential project, in which novel technologies and their uses motivate a larger rethinking of the roles and purposes of law, rather than a jurisprudence of exception (Lessig) or a jurisprudence of tradition (Easterbrook). But it has taken some time for elements of an integrative project to emerge. Rebecca Crootof and BJ Ard, in Structuring Techlaw, are among those who are now building in that direction and away from scholars’ efforts to justify legal exceptionalism in response to various metaphorical horses – among them algorithmic decision making, data analytics, robotics, autonomous vehicles, 3D printing, recombinant DNA, genome editing, and synthetic biology. Their story is not, however, primarily one of power, ideology, markets, social norms, or technological affordances. Julie Cohen, among others, has taken that approach. Structuring Techlaw is resolutely and therefore usefully positivist. The law and legal methods still matter, as such. The law itself can be adapted, reformed, and perhaps transformed.

In that spirit, Structuring Techlaw offers a framework for organizing legal analysis (Pp. 8-9), rather a solution, so it is (admirably, in my opinion) primarily descriptive rather than normative. Like Leo Marx’s classic The Machine in the Garden, exploring American literature’s industrial interruption of the pastoral, it clarifies the situation. The article is a field guild to problems in technology and law, rather than a theory or a jurisprudential intervention. As a field guide, few of its details will be new to scholars, lawyers, or even students familiar with technology policy debates of the last 25 years. But the paper collects and organizes those details in a thoughtful, clear way, with priority given to traditional legal forms and to illustrations drawn from a wide variety of technology-animated social problems. Historical problems get attention, including those that long pre-dated the internet, along with contemporary challenges. The resulting framework is for use by scholars, policy makers, and other decision makers confronted with what Crootof and Ard characterize as a critical problem common to all types of new technology: legal uncertainty in the application and design of relevant rules.

Techlaw exposes legal uncertainties of three types. The framework consists of those three types, in layers, with some nuances, details, and illustrations added for good measure, together with likely strategies for dealing with each one. Each type of uncertainty is described in terms of familiar debates. Some of those concern the welfare effects of precautionary and permissive regulatory approaches. Some concern choices among updating existing law, imagining new law, and reconceptualizing the legal regime the context of institutional choices. The full framework is laid out in a single graphic. (P.11.) 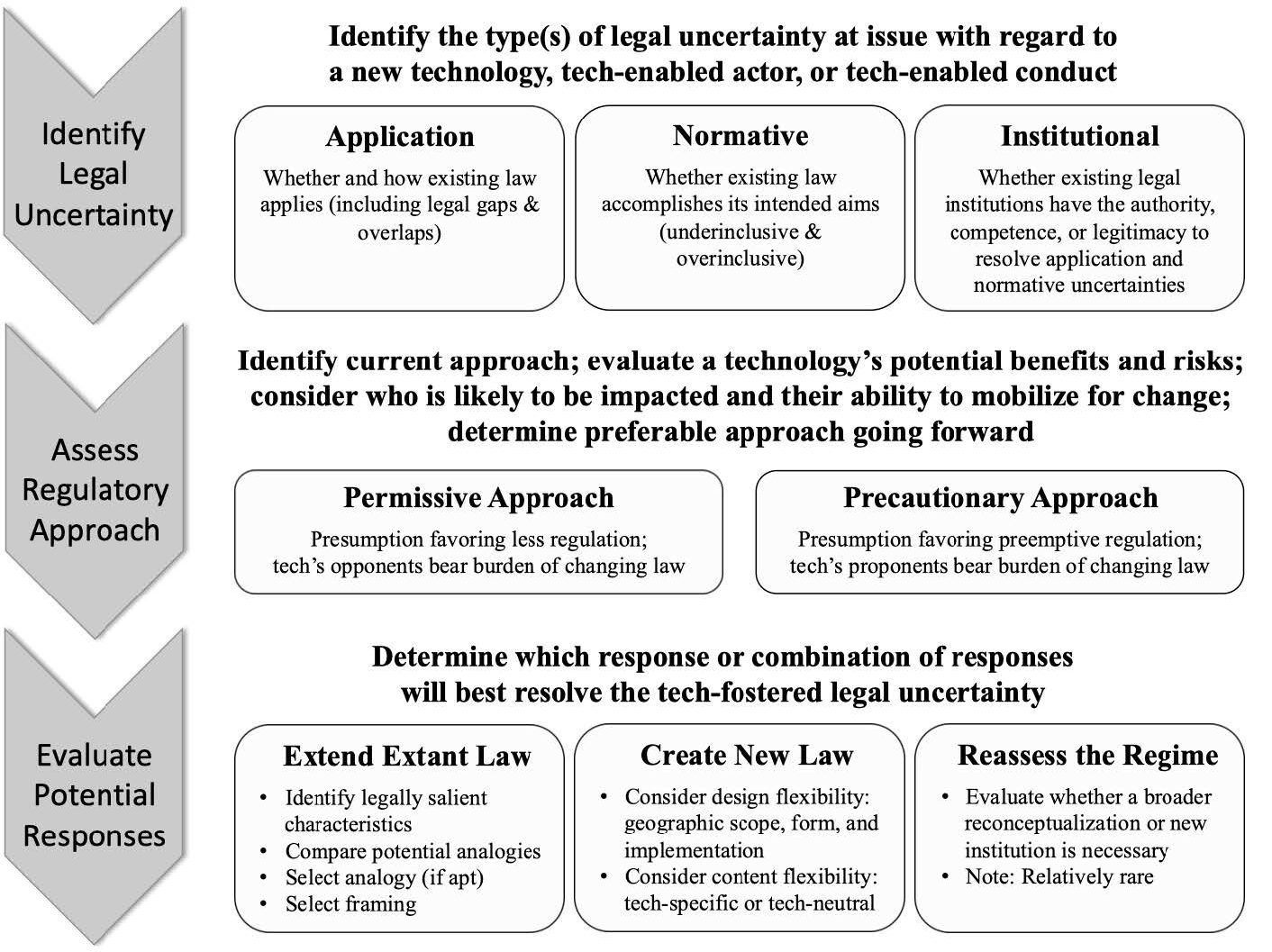 Layer one consists of application uncertainties, in which existing legal rules are deemed to be either too narrow (gaps) or too broad (overlaps) as responses to technology-fostered social problems. Regular or traditional tools of legal interpretation may be used effectively here.

Layer two consists of normative uncertainties, in which technology-fostered problems expose larger concerns about the purposes and functions of the laws in question. Existing law may be revealed to be underinclusive or overinclusive relative to its original aims. This is the space for normative realignment of the law.

Layer three consists of institutional uncertainties, in which the roles and responsibilities of different legal actors are called into question based on concerns about legitimacy, authority, and competence. Are technology-fostered problems best solved by updates supplied by legislatures? By administrative agencies? By courts?

This is not so much a functioning method for reaching a judgment in a particular instance in practice.. It’s best viewed as a tool for understanding. Crootof and Ard round out their description with examples at multiple points along the way, but they don’t seek to apply the framework fully either to a real historical case or to an imaginary new one. Instead, the framework is best understood as they describe it (P. 47 n.187): as an idealized template by which observers and participants alike can begin to discern and respond to common patterns in law-making, rather than deal with each technology as a shiny new object or worse, as a distracting but entertaining squirrel. The framework may produce an integrated jurisprudence of technology and law as it is used over time, over multiple applications.

Will it? If the challenge of resolving uncertainties in legal meaning evokes H.L.A. Hart’s famous “No Vehicles in the Park” illustration of interpretive flexibilities in the law1 – a positivist Pole star – that is no accident. Structuring Techlaw is replete with references to Hart (P. 16 n.35) and Hartian interpretations and extensions. (Pp.69-70.) But one needs a way to get from what this rule means (per Hart) to how this rule is part of a pattern of multiple rules, some for equivalent instances and some for different ones. Crootof and Ard manage the transition to a pattern of multiple rules via an overview of the critical role of analogical reasoning and framing effects in legal interpretation. (Pp. 52–62.) That move is surely the right one; analogies help us scale from case to case, from case to rule, and from rule to system. But its success depends on any number of empirical claims as to how legal reasoning actually works in practice, such as those summarized by Dan Hunter, that are beyond the scope of this work.

Moreover, as Crootof and Ard acknowledge, fully specifying the framework and building the resulting field of law requires exploring a standard set of questions regarding comparative institutional advantage. They don’t do that in Structuring Techlaw. Tantalizingly, they promise that exploration in an additional paper. (P.9 n.19.)

Even more tantalizing are glimpses of jurisprudence yet to come. I wondered a bit about Structuring TechLaw’s emphasis on legal uncertainty. The return to positivism is an important one, but some scholars today place significant normative weight on humans and humanity in legal systems, precisely because of the lack of predictability, certainty, and consistency that human imaginations entail in practice.2 Some scholars argue that contestability of legal meaning, an attribute that is akin to uncertainty, is both essential to the rule of law and threatened by some novel technologies.3 Crootof and Ard hint that there is more in store on this point. Understanding humans in technological systems, or “loops,” is the promised subject matter of an “aspirational” manuscript. (P. 12 n.26.)